The long-standing cooperation of IOTA and the Taxation and Customs Union Directorate General (DG TAXUD) of the European Commission has reached a next level by signing the ‘Arrangement for Co-operation between IOTA and DG TAXUD’. Parties agreed that there is a need for deeper and closer cooperation in order to efficiently work together for the common goals of both of the organisations: to modernize and strengthen the capacities of tax administrations by exchanging experiences among IOTA and EU member states and candidate countries though structured dialogue processes and within the framework of cooperation programs from both organisations. 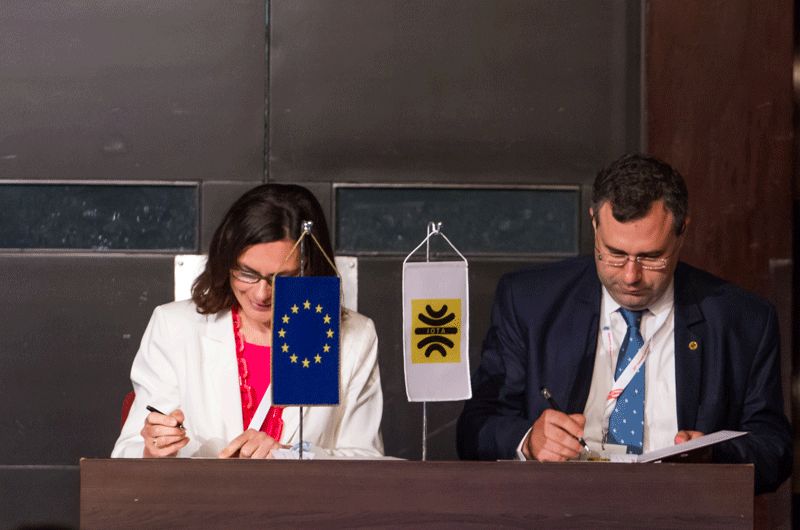 The Arrangement for Co-operation was signed in an official signing ceremony during IOTA’s 20th General Assembly on 7 July 2016 in Bucharest. The document was signed by IOTA’s President, Mr Octavian Deaconu and by Ms Caroline Edery, Head of Unit, Tax Administration and Fight Against Tax Fraud, DG TAXUD. Ms Edery in her speech has highlighted: ‘The Commission has been supporting IOTA since its very birth, and closely followed its progress. We share the same objective: supporting European States in developing and modernising their tax administrations, and make them organisations of excellence at the service of society. IOTA and the European Commission have developed a lively cooperation, by coordinating our work programs, organizing joint events and participating in each other's activities. I am glad to renew today our commitment to even deeper cooperation. Because there is a word that qualifies the evolution of IOTA over the years, this word is "professionalism".’

The Arrangement -apart from the general principles of cooperation- stipulates the main areas of collaboration (such as fight against tax fraud and tax evasion, exchange of information, mutual assistance, improvement of compliance, capacity building, etc.) together with the means of cooperation (such as joint events, participating in events organized by each side, cooperation in programming activities, etc.).