IOTA was represented on high level in OECD Committee on Fiscal Affairs meeting in Kyoto, Japan on 30 June and 1 July. Representatives of more than 80 countries and jurisdictions have gathered in Kyoto to push forward ongoing efforts to update international tax rules for the 21st century, the latest step in the OECD/G20 Project to tackle Base Erosion and Profit Shifting (BEPS). IOTA was represented by Acting Executive Secretary, Mr Jan Christian Sandberg and IOTA Executive Council member, Mr Ignacio del Rio whom as invited participant from Spanish Tax Agency also contributed to represent IOTA. The meeting marks the first time that a broad range of countries, representing varying levels of development, come together on an equal footing in the OECD’s Committee on Fiscal Affairs, and inaugurates the new inclusive framework on BEPS implementation.

Today we launch a new era in international tax,” said Mr Pascal Saint-Amans, director of the OECD Centre for Tax Policy and Administration. “Through their participation in the decision-making as well as the technical working groups of the OECD's Committee on Fiscal Affairs, the members of the inclusive framework will now have a direct influence in shaping international tax rules to tackle BEPS and ensuring a level playing field.”

Mr Jan Christian Sandberg had discussions with Mr Pascal Saint-Amans on the margins of the meeting and they have agreed that IOTA and OECD will deepen and broaden the cooperation in order to be able to assist the members of the two organisations to tackle Base Erosion and Profit Shifting. The new Memorandum of Understanding between IOTA and OECD will follow up on this and will be extended to include wider areas for cooperation. OECD and IOTA plan to have a regional meeting on BEPS this autumn, especially for the members in the Eurasia region (non OECD members).

IOTA Acting Executive Secretary sees increasing role for IOTA in contributing to the fight against BEPS: The rapid development on global cooperation and ambitious plans for implementing new measures affect all tax administrations. OECD has realized that only OECD countries cannot achieve this, all countries must participate, especially the less developed countries which are suffering because of BEPS. That is one of the reasons why OECD has developed the idea of Inclusive Framework. It will take a lot of resources to implement the various actions and measures. The tax administrations all over the world must increase their capacity and knowledge base. The regional tax organisations can play an important role in this work. That is one of the reasons why these organisations have been invited to this meeting.

Further information about Committee on Fiscal Affairs meeting is available on OECD’s website: 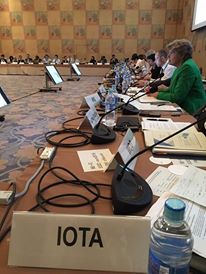