Twinning Project between the Tax Administration of Montenegro and Spain

The project „Support to Tax Administration“ is the first Twinning project in the Tax Administration of Montenegro, and it will involve numerous stakeholders such as Ministry of Finance and Customs Administration, and business and taxpayers associations, as the main contact point for communication with taxpayers and promotion of voluntary tax compliance. The value of the project is 1.000.000,00 €, where the EU contribution is 900.000,00 €, and the co-financing of the Montenegrin government is 100.000,00 €. 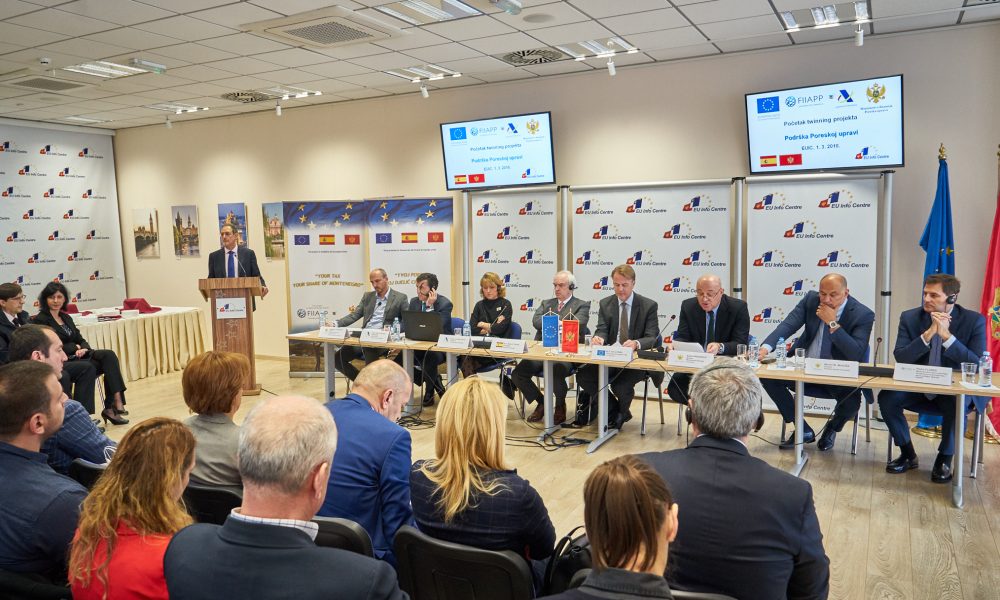 The project leaders from the Spanish and Montenegrin administrations, Mr. Juan Jose Fernandez Sanchez, and Mr. Anđelko Jovanović, the Resident Twinning Advisor from Member State Jesus Gayare and Resident Twinning Advisor from Beneficiary Country Lidija Šećković, as well as the staff of the Montenegrin Tax and Customs Administration and representatives of the taxpayers` associations in Montenegro were also present in the kick off conference.

The project leaders from the Spanish and Montenegrin administrations presented the realisation plan for all four components:

– harmonisation of the legal framework in the field of taxes and excise;

- establishment of the efficient training programme for the MTA staff;

- preparation of the basis for automatic exchange of information and the establishment of the Central Liaison Office;

- detailed analysis of the existing IT capacities, and definition of requirements for interconnectivity and interoperability with the EU systems.