THUNDER 2020 was a global environmental monitoring operation coordinated by the WCO and INTERPOL on a large scale, which was simultaneously implemented by several customs administrations across multiple jurisdictions, mobilising 103 countries against wildlife and forest crime, under the global customs theme of the year: “Customs promote the Sustainability of People, Prosperity and the Planet”.

THUNDER 2020 took place from 14/09 to 11/10 at global level and, at national level, from 22/09 to 11/10, with the main objective of combating trafficking of protected and/or endangered species (fauna and flora) under the CITES Convention, as well as detecting, identifying and investigating criminal activities in order to dismantle international criminal networks involved in illegal timber trade and related criminal activities. This is the fourth operation in the Thunders series, conducted annually since 2017, and which has resulted in significant seizures and arrests of thousands of suspects involved in the illegal trade of wildlife and timber species.

These coordinated global operations give impetus to a positive feedback cycle, as well as allowing an update of risk indicators for profile improvement. Focusing on pre-identified routes and hotspots, Operation Thunder 2020 has resulted in over 2,000 seizures of wildlife and forest products. In total, 699 offenders have been arrested and a Red Notice from INTERPOL has already been requested, based on information obtained during the Operation. Further arrests and prosecutions are planned as ongoing investigations progress.

A number of situations have been detected, including the following:
•    In Cameroon, customs officials seized 187 elephant tusks (865 kg of ivory) from a lorry crossing the border from Gabon;
•    Mexican police rescued an adult female white tiger, a jaguar and a four-month-old lion cub in Sinaloa;
•    Zimbabwean police prevented the transfer of 32 live chimpanzees from the Democratic Republic of Congo;
•    Customs in India intercepted a shipment of 18 tonnes of red sandalwood headed for the United Arab Emirates.
More than 45,500 live animals and plant species were discovered during the operation and 2,082 seizures of wildlife and forest products were made. 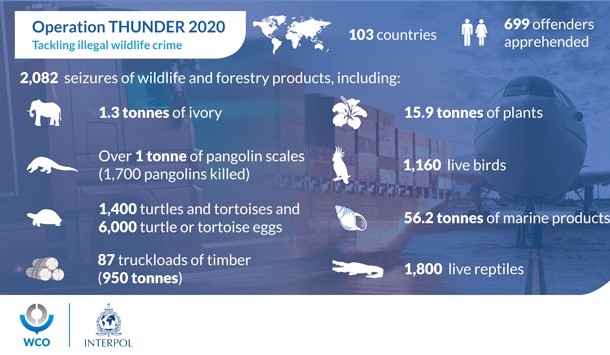 Portugal took part in operation THUNDER 2020, with the participation of the Tax and Customs Authority, namely through the Customs who carried out controls on maritime, air and postal routes, with the support of ICNF – Nature and Forest Conservation Institute.