The first call-centre 077 at Revenue Service of Georgia (GRS) was developed within the framework of the EU Project which was completed in March 2008. Its functioning lasted till May 2010. The renewed Information-Telephone Center 2 299 299 was launched in the Revenue Service on 17 June 2013. It was technically set up in a very short time on the pre-existing technical base of the first call-centre - 077, with limited additional financial and technical support. The service is available to everyone, it saves taxpayers’ time and reduces costs. The number of users increases by 11-12% every year.

Statistics of the calls received between 2017 and 2020 is as follows:

The average number of daily received calls is 1500-1600, while average talk time is 3 minutes. As for today, the Information-Telephone Center has 32 consultants. Due to the special necessity to use the service during the pandemic, with the extension of the call-centre working hours from 9 AM to 8 PM, including weekends, more than 71 000 calls were served during the period of April-June 2020, from which 6980 were during the non-working hours. 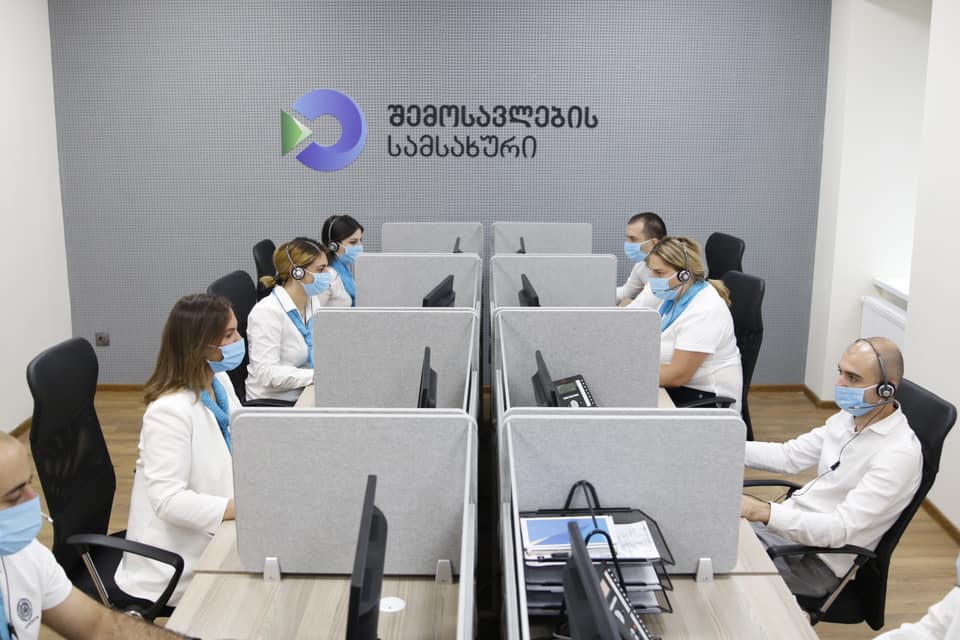 Revenue Service, as a part of its strategic goal, has been working actively to elaborate remote service sub-strategy and take corresponding actions to extend remote services. One of the examples of above-mentioned is the updated infrastructure for call-centre within GRS to respond to increased demand from the taxpayers. As a result, call-centre of GRS has been recently moved to the newly modernized building.  The management of the calls received and processed by the staff is carried out entirely through the special software of the system, which provides information on the quantitative and qualitative indicators of performance.

Information includes data on the number of calls, data about the call duration per day, week, month, year, the performance of both individual operators and the team, also:

The system has a total of 35 performance reports and also the ability to ensure 10 "live mode" reports via the real-time screen. As for the organizational structure of the call-centre, it includes a small team of supervisors, back-group, responsible for permanently taking care of the information provided to the staff, adapting information to the customer needs, preparing qualified answers, updating the knowledge base, training of staff in the call-centre.

The Information-Telephone Center will be further updated in the near future. All necessary channels will be unified and integrated into the IT of the renewed centre, which will allow GRS to communicate with customers with not only phone calls but also with various multichannel systems – online chat, SMS service, use of the auto-dial functionality on a pre-selected category of taxpayers.

The system will use only its own resource, as, for example, in the case of online chat - in case of its inclusion to the website, the site resource will not be used. The perspective of building the module of chat-bot on the existing system is important for the future development purposes of the new information-communication technologies. According to the concept of strengthening the remote service direction of the Revenue Service, the installation of new information and communication technologies is planned for 40 telephone and 10 online chat workplaces.

The features of new informational systems will include: