The MoU on ISORA was signed on 16 April at an official signing ceremony at the ‘Spring Meetings’ events of the International Monetary Fund (IMF) and the World Bank Group in Washington DC. Ms Katherine Baer, Division Chief of Revenue Administration of IMF opened the ceremony by giving an introduction to ISORA. High level representatives of the four partnering organisations, IMF, OECD, CIAT and IOTA, signing the MoU agreed that this signature represents a historic achievement. They also expressed appreciation for efficient cooperation of the four organisations and highlighted the outstanding work of the Technical Working Group on ISORA.

IOTA President Mr Octavian Deaconu and accompanying IOTA Acting Executive Secretary Mr Jan Christian Sandberg had several side meetings on the margins of the event with high level government officials and representatives from the global tax community. President and Acting Executive Secretary gave insights into IOTA’s work and discussed major challenges in international taxation with politicians, policy-makers, partner organisations, etc. They agreed that due to recent developments there is an even stronger need for cooperation and to build relevant capacity in the tax administrations. BEPS, Automatic Exchange of Information, transparency and the recent Panama Papers case were the few keywords representing the major global challenges discussed at the Spring Meetings. These global challenges require global solutions and tax administrations and organisations dealing with taxation will strengthen collaboration in order to help build capacity and understanding on how to implement the visions and policies. 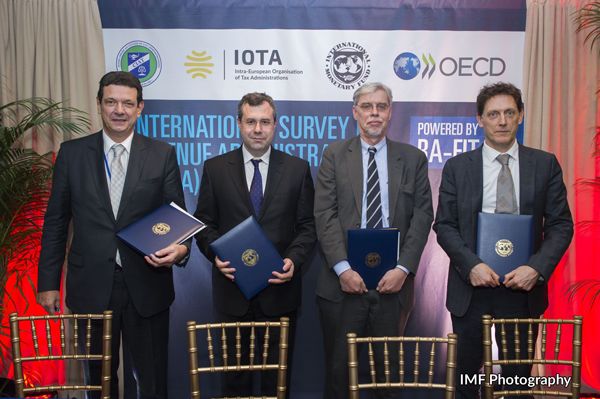