IOTA and OECD held a series of discussions in the margins of the 4th OECD Meeting of the Inclusive Framework on BEPS and the 110th IOTA Executive Council meeting, both held in Paris on 24-25 January 2018. During the side meetings the two organisations took stock of the ongoing cooperation and agreed on future steps. 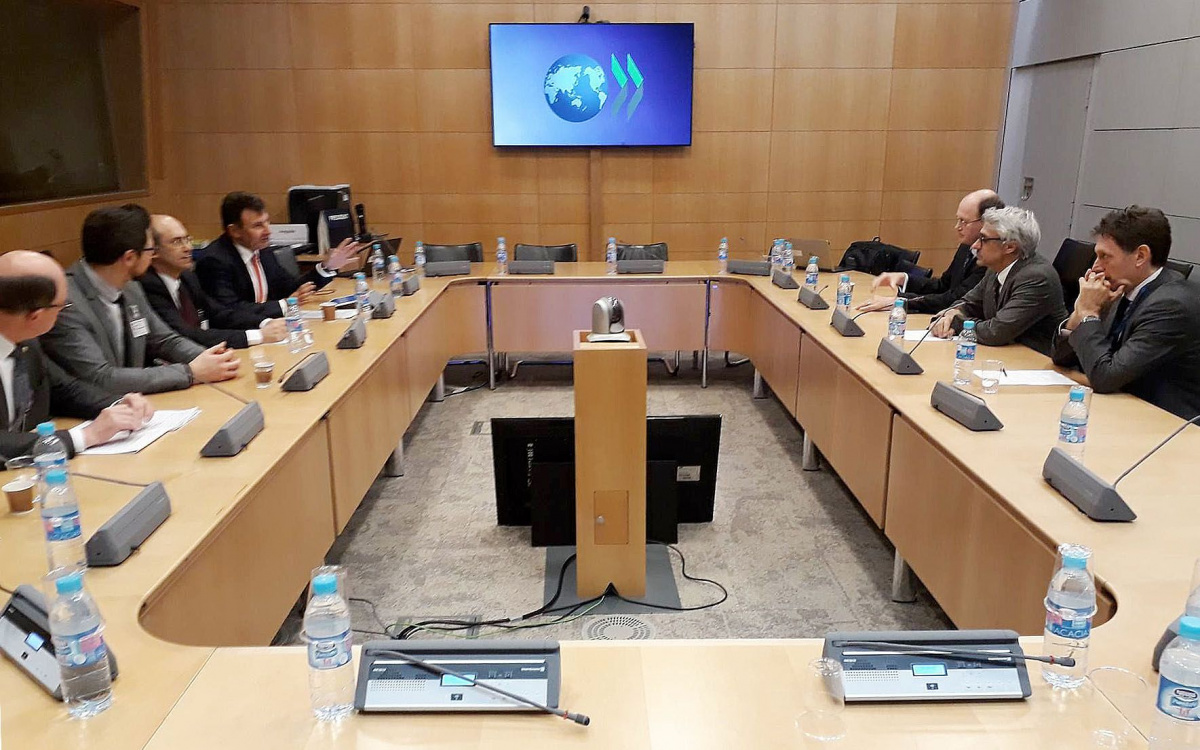 The excellent cooperation between the two organisations, in particular regarding the joint regional meetings of the Inclusive Framework on BEPS and the International Survey of Revenue Administration (ISORA) was acknowledged and it was agreed to continue the successful cooperation in both areas. Both organisations recognised the need to communicate and coordinate joint activities more timely and efficiently in order to maximise the use of each organisation’s resources. Mr Imrecze expressed the wish of IOTA to join the OECD Global Forum on Transparency and Exchange of Information for Tax Purposes. The IOTA President invited Mr Saint-Amans to the forthcoming IOTA General Assembly, which will take place in Bratislava on 25-27 June this year.

Another meeting took place between IOTA Secretariat and the OECD Global Relations where IOTA’s Executive Secretary was accompanied by Mr Eugenijus Soldatkovas and Mr Roman Bichevoy, Technical Taxation Experts. The meeting addressed the planning of the next Regional Meeting of the Inclusive Framework on Implementation of BEPS for Eastern Europe and Central Asia countries and preparations for joint OECD-IOTA events on a variety of topics related to implementation of measures to counter BEPS and the automatic exchange of information to be organised under the OECD’s Global Relations Programme. Opportunities for cooperation in promoting and facilitating participation of IOTA members in the Tax Inspectors Without Borders (TIWB) programme, a joint tax audit assistance initiative of the OECD and the United Nations Development Programme, were also explored.

In addition, Mr Wolfgang Büttner and Mr Roman Bichevoy met with Mr Oliver Petzold from the OECD Secretariat to discuss the preparations of a joint OECD-IOTA webinar on the use of the ISORA/TIP data portal. This joint effort is aiming to demonstrate to IOTA member tax administrations that participated in ISORA 2016 how to use and navigate through this portal, as well as what kind of analyses can be performed using data contained in the database. The on-demand webinar will be launched in February 2018.

Finally, Mr Peter Green, Head of the OECD Forum on Tax Administration (FTA), delivered a presentation on the OECD FTA work programme for 2018 at the 110th meeting of IOTA’s Executive Council, hosted by the General Directorate of Public Finances of France. He highlighted the opportunities for collaboration with IOTA in the FTA, namely on projects that the OECD is starting or carrying forward in the field of tax debt management, sharing & gig economy and the use of data from Common Reporting System, where input from the work of IOTA in these areas could be complementary and mutually beneficial.